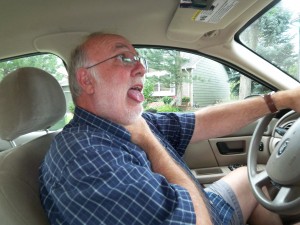 Carol and I were driving back to northern Illinois to attend my mother’s funeral. We stopped in Ogallala, Nebraska to get some road food from McDonalds along with two servings of their ice coffee. If you’ve never had their ice coffee, it comes in tall glasses with tall straws. After eating my breakfast biscuit and drinking my ice coffee, I used a tooth pick to clean my teeth. When I was finished, I just dropped the tooth pick down the straw of my empty ice coffee. About a hundred miles down the road, Carol reminded me that I didn’t take my blood pressure medicine, which I’m supposed to take with food. She got me the two pills which I promptly popped in my mouth. I reached for Carol’s ice coffee to wash them down but it was empty. She handed me mine, and this is the funny part because I knew that used tooth pick was in the straw, but I felt it would bump against the roof of my mouth and it would be no problem. I sucked the melted ice that was in the bottom of the glass and felt like the pills didn’t go all the way down. Carol then found a water bottle and I took a big swig out of that and then realized I had swallowed the tooth pick and it was stuck in my esophagus. Here we were in the middle of nowhere and the though just went through my mind that I’m on my way to bury my mother and I could be dead in 4 or 5 minutes. It was then that Carol said, “Let’s pray”. I tried not to swallow as I didn’t want to do anything that would further lodge the toothpick in my lower esophagus. It didn’t take long of not swallowing before the buildup of saliva forced me to. As I tried to swallow, I was forced to cough and it appears that cough loosened it up that it wasn’t crossways in my throat. Since that threat had passed, I was thinking I may not want to try and eat anything until I was at my destination with a hospital close by, in case the food knocked it against the wall of my esophagus. This thought would come back to me soon.

We got off at the next rest stop, and as I was walking to the facilities building I heard The Lord say, “I want you to get on your knees and give me thanks”. I went around to the back of the building and did just that. When I finished and was walking to the car, I heard The Lord say, “Now eat something”. When we got into the car, I told Carol what had happened, so we tore into some M&M Peanuts and they went down with no problem. After some more giving thanks we got back on the Interstate. A few miles down the road I looked at Carol and she was crying, which usually means The Lord was telling her something. This is what He had to say to her; “I have saved you for my purpose. My plan for you is greater than you can think or imagine. You are in my thoughts and I long to be with you, to be your God. I want to spend time with you.” What an awesome God we serve!

If you enjoyed this article, please consider sharing it!